You are here: Home / Special Needs Parenting / Asking for Help is Hard to Do 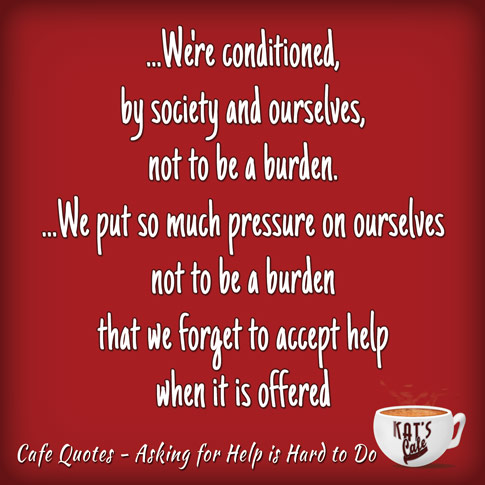 Back when we were first going through Bobby’s diagnosis and learning how to parent an amazingly awesome little boy, we didn’t realize just what special needs parenting was all about. We were just concerned with the diagnosis – we wanted answers.

We didn’t care as much about support – because no one seemed to understand what we were going through anyway. And when we needed help, family and friends (and the church) were there.

Over the years, we went through more of the diagnosis merry-go-round as each child came busting into this world with their own brand of awesomeness. And we didn’t care much more about support, because it still seemed no one could still understand what we were going through. And when we needed the solidarity of prayer I just asked on social media or privately with a few friends or family.

But, alas, over the years, I’ve come to this realization:

You Usually Don’t Want Support When you Finally Need It

“What’s that, Kat?” … you say. It’s the truth, though. Over the years we became so used to no one else understanding, so accustomed to having sporadic offers of help and support (family really can only do so much when they have their own lives), so disappointed when we realized we were asking the same people for help time and time again – that we shored up our own defenses.

We stopped asking for help. And we stopped NOT-caring about the support and realized that even though we needed it, we didn’t know how to ask for it – or who to ask for it. And it was embarrassing …

Damn embarrassing … to always be that family. You know, the family who is always swerving to avoid the fallout from one crisis after another. To always be asking for prayer. To be needy.

We’re to That Annoying Place Again

That place where we need help and don’t know where or who to turn to. I’m fortunate enough to have some amazing friends, but very few of them are local. I’ve met some of my best and most supportive friends online, and many of them live hundreds of miles and states away.

But with Logan having sporadic breakthrough seizures (and deciding sleep is overrated, among other things), Jim having a re-emergence of his CRPS and having breakthrough seizures of his own, and being dealt with a few too many of those fun things we call medical issues (and the bills that go with them) … well, let’s just say that I’m again looking around wondering what the heck others mean when they talk about their amazing support system. Because support, here, means it is just Jim and I going without sleep.

We have … us. I have great friends online and a few amazing folks I can turn to locally – but for what? To help with the kids? Help me do the dishes (that’s the sound of me laughing uproariously)? Help Jim mow the yard? Help him fix the car?

Why am I laughing?

This post languished in the drafts folder for a long time because I just couldn’t get up the courage to post it, but a recent conversation with a friend on Facebook reminded me how much we all treasure and long for support, even if it’s hard to ask for or accept.

She responded to a request for prayers because of some issues with Logan, and simply said “How can I help?”

And I stopped for a minute.

It’s been a long time since someone asked that directly.

But even longer since I answered with a way someone could help me.

And I had to think it through and mull it over a bit, because why is that? I know some families with special needs children don’t have this problem, but for many of us, support is just not something we have.

For us, I think I traced it back a bit … the story goes something like this:

We had one child with special needs and he was adorable and cute and it was overwhelming. Family and friends were all over wanting to help, with babysitting and meals. After the second child, that same family started to fracture a bit. Folks started saying it was a lot to ask them to ‘always’ help. Never mind the fact that we weren’t asking all the time – more folks had been offering to help ’til now after all – now it felt like it was ‘wrong’ to take anyone up on that ‘help.’ We still, however, had a couple amazing folks who were always on our side and always wanted to try and make things easier for us.

After our third child was born, and we now had three amazingly cute kids (I might be biased, but you’ll never convince me otherwise!), it was even harder. Our ‘amazing folks’ had both passed away or moved away. Even having someone stay with the older two when Logan was born was an impossible proposition. Managing a child in the NICU for 6 weeks while still having two children with significant needs at home was difficult. Jim and I did it, but it was hard. We had a few family members who would help in a heartbeat anytime we asked, if they could. But you stop asking after a while because you hate asking the same people for help all the time.

Skipping forward to today, we rarely ask for help, and when we do, sometimes the people aren’t too ‘busy’ with their own jobs and lives to help. When we ask we always feel guilty for doing so. We’re contemplating paying a family member to stay with the kids so we can hopefully have an anniversary dinner and movie out. We don’t qualify (yet, ever …) for respite and finding a babysitter to watch all the kids outside of friends of family is impossible because of the combination of seizures and autism, and finances (let’s not open that can of words!).

The point is, over the years we conditioned ourselves NOT to reach out, NOT to ask for help, and NOT to accept it when it is (rarely) offered.

And that’s our story — a few statements early in our parenting adventure helped condition us to feel guilty about asking for and even receiving help. Over the years people stop offering to help, and we accept it even less when they do. We don’t want others to think we’re a burden, that we’re selfish … so we stick to ourselves.

So much so that  friend asking how she could help brought me to my knees and almost to tears. Because it’s been so long since I was asked. And because I felt guilty for trying to think of some way she could help.

Special Needs Parenting – It’s Really Not All About Me

Here’s the point – this is something I’ve seen other special needs parents blog about, or commiserate about in private conversations (or over social media). But how often do we really stand up and say we need help? Do we follow through on someone else’s desire to help?

And why is that?

I think it’s because we’re conditioned, by society and ourselves, not to be a burden. Over the years I think we put so much pressure on ourselves not to be a burden that we forget to accept help when it is offered, even if those offers are years apart.

It’s a good reminder that we isolate when we’re hurting, when we’re stressed, when we’re overwhelmed – but we should be reaching out, physically reaching out to find the support that will carry us emotionally and physically, and yes even financially, through.

Our story is a journey that’s singularly our own, but I’ve heard it repeated in private conversations with other special needs parents over the years. By the same token, I’ve seen families that do receive help and support – they always have family and friends around to help with the realities of their world. I can’t help but thinking – did they accept help I would have pushed away or were they just offered more understanding and help in the first place?

What do you think? Do you push help away? Have friends and family stopped offering? Or is your story something different? Tell me about it in the comments!