You are here: Home / Advocacy / Autism: Unique is Awesome – Expressions of PosAutivity: #AutismPositivity2014 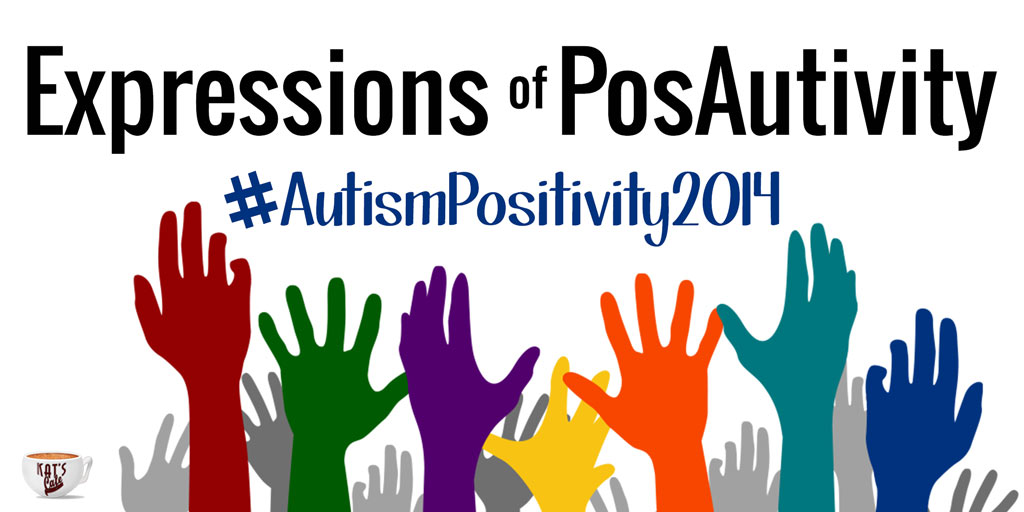 If you haven’t read the letter you can Google for it, I refuse to link to it. I know there are some parents who feel Autism Speaks really does speak for them and their experience in dealing with autism. But after seeing her words literally call my kids a tragedy, imply that they are missing, imply my kids and others who happen to be autistic are singlehandedly destroying their families, their parent’s marriages …

I was convinced that someone somewhere at that organization had lost touch with the Autism I know and love. And they don’t know the autistic folks I know – because the adults and children I know, including the ones I adore and love and call my own – they are amazing, beautiful and unique people.

I found, over the weeks and months that followed, that I was increasingly sensitive to the negativity, the almost dehumanization, that seems to accompany some forms of autism awareness. Even some parents would use words to describe their experience that made me flinch. Maybe they were having a bad day, or they were just at a different point in their journey, but it made me increasingly uncomfortable.

Why was I so sensitive?

Not because their experience of feeling overwhelmed was wrong … it’s not about being right or wrong … it’s because the negativity was becoming harder for me to deal with. I actually wrote a friend in a panic wondering if something was wrong with me. I found myself upset by these posts because they seemed to be all I was reading.

Let me reiterate that there’s NOTHING wrong with parents venting and dealing with their experience in their own way. And sometimes I vent too …  BUT I follow a few rules …

Our Rules of Posting:

When we’ve stayed up all night I’ve been known to mumble on FB or Twitter about the expanded need for coffee 😉 I tend not to share something if it would put any of my kids in a negative light. Generally, the public doesn’t need all those details – and I want to respect my guys’ privacy. Everyone has their own level of comfort here, but I encourage everyone to consider what theirs is.

Back to the point – Negativity hurts me, and it’s okay to recognize that!

I was hurting and I was struggling … and I felt like I was alone in a sea of others sharing the constant negativity. I felt alone. The continuous negativity was making it hard for me to find a place of balance.

I understand that we’re all on our parenting journey and while we sometimes walk similar paths we won’t all arrive at the same destination, nor will we take the same paths to get there. My autism, my autistic kiddos, are not your own.

But respect those who see it differently.

Because there are so many parents, walking so many paths, arriving at so many of their own destinations, it’s understandable that we’d stumble across each other. In forums, on social media, in groups … we often see that paths the we are walking are similar and we talk, we cry, we share … and we love.

But we don’t always agree.

I often hear in parenting groups the words ‘my autism is not your autism’. And there is a poignant truth to that statement. But there is also another side to consider. At any given time, we have the power to look at autism, to look at the autistic person we love, we have the power to look at them and see their beauty. Not the physical beauty, but the sheer individuality that shines from them and how they view the world around them.

My guys are all on the spectrum, but they are as different as night and day. They each have strengths and weaknesses. The weaknesses do not represent tragedy, they do not overshadow the strengths they have, but compliment them instead.

Andy is my quirky guy. Unless you were familiar with autism you wouldn’t see it when you look at him. He’s worked hard and grown into a young man who’s both serious and happy. He sometimes has trouble understanding the social clues around him and will ask us questions to help figure those clues out. He’s highly verbal, an academic at heart, a little bit of a comic geek and he loves to draw. He can sketch just about any comic image freehand and loves his art!

Logan is my mischievous little man who has an easy smile and an addictive laugh. He reacts to music and seeks out sensory experiences with a passionate determination. He’s still learning how to communicate and sometimes has trouble getting us to understand what he wants. He gets frustrated when he can’t show us what he wants. He needs more help and support, but he’s a consistently happy little guy.

When Autism is more Challenging

Yes Logan has more needs, right now, than his brothers do. Yes he has more challenges and he still hasn’t found all his words yet. Yes he sometimes gets frustrated and he can’t always access the few words he does have.  All the bits and pieces that make up Logan’s autism, that make it more challenging, or maybe challenging in a different way, are still part of him. I’d be lying if I said it was all amazing all the time – we have difficult times too.

Yes, it can be tiring and frustrating and even sometimes a little scary for us – but we always try to see how HE is feeling, what HE is trying to communicate (because we firmly believe all behavior is communication).

I feel bad when I hear parents say that their kid has more severe autism and therefore you can’t be expected to fully understand just how hard it is for their family, how much having a ‘cure’ would mean because it would allow their child to be normal.

As difficult as it is when we are having a challenging day; those hard days don’t happen all the time – instead we have sleepless nights or rough afternoons or even frustrated mornings.

But here’s the thing … the point … the thing we hold onto … it isn’t all bad all the time. Not even a good chunk of the time.

Because beyond all that, I CAN see his smiles, his laughter, his fascination with even small things like raindrops (he loves them!) and leashes, cords, strings … we see the other side of the path, the beauty, the uniqueness too.

When all you read is negativity, when all you see is how horrible autism is, when all you read is the bad, the fear, the shame … how do you know to look beyond to the individual? How do you learn to look for the beauty? My problem with seeing so much written by folks who seem trapped in that mentality is NOT that they show the negative, but that they rarely, if ever, show you the positive.

When you look FIRST for the positive, the negative ceases to be quite so overwhelming, even when you can recognize it and accept it. Even when you want to cry and rage and scream because it’s hard. You claim the good and the bad; you know that nothing good in life comes without hard work and sacrifice, without dedication.

Our boys are each amazing and have worked hard to be where they are today. They each have a special way of seeing and interpreting the world around them. They are each autistic, they are different, they are unique, and they are awesome.

I get that not all folks see autism the same way, but for me and my family, autism will be nothing to fear, nothing to stigmatize, nothing to demonize. It’s just another piece of who they are.