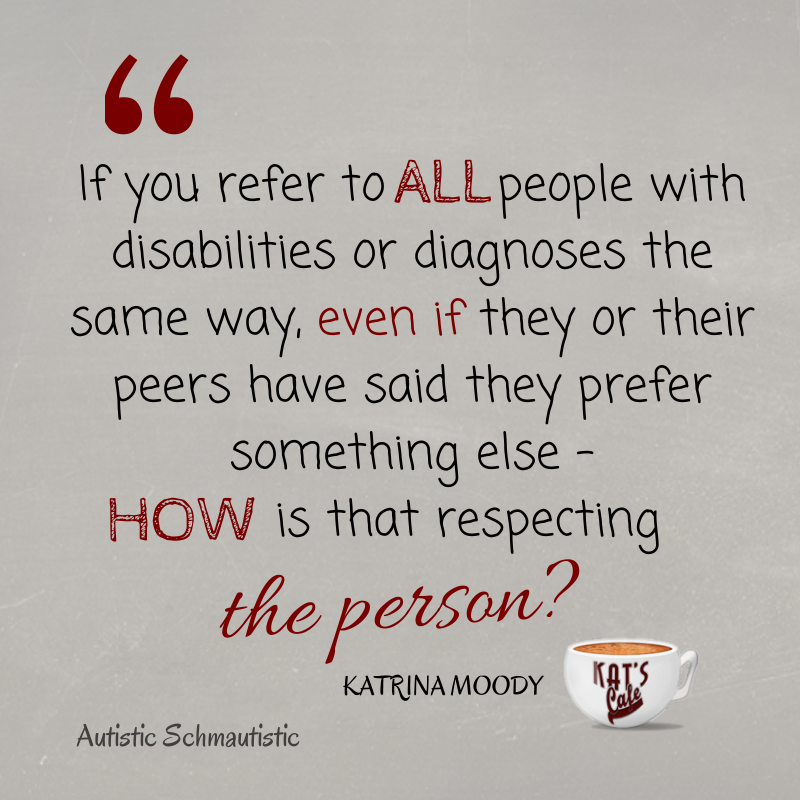 People-first language used to be a big deal to me.

I remember, as a parent new to my kids’ varied diagnoses, looking around wild-eyed and desperate for information and encountering the idea. It seemed to make sense at first, but after a while (and a few more diagnoses) I began to wonder how we got to the point where we dictated the language other parents used to describe their own kids, how we judged the language autistics use to describe themselves …

For those who don’t know, or who would like to read more about the idea, People-first language literally means putting the person before the disability, and in theory I like the idea. Kathie Snow over at Disability is Natural has a great goal with the idea of people-first language – she wants her kid to be seen as the amazing kid he is before adding in any diagnosis he might have. On its surface, as I said, I like the idea. You can see a chart of “Examples of People-First Language” at Snow’s site.

Here’s the problem I have.

People first language assumes that our kids are separate from their diagnoses, that they can’t and shouldn’t claim those diagnoses for themselves, and that we shouldn’t let them do the same. Because, even though I am a parent, even though my husband is a parent and autistic himself, proponents of people-first language say that referring to our children as autistic will harm our kids, disrespect them even.

In some ways people-first language makes sense – for instance saying “people with disabilities” instead of the handicapped or the disabled. But when you are talking about a person and they have a specific diagnosis – we’ll go out on a limb and say autism here – why would you assume everyone wants to be identified the same way?

Yes I am a Geek – Researching at work here:

I first learned about and made the decision to NOT use people-first language a few years back. At the time my inner editor was hating the sentence structure (Hey! I’m honest!) but my heart was saying that the distinction shouldn’t be made by parents, but instead by the folks who, you know, actually have the diagnosis. I don’t remember the links I found at the time, or the forums I read through. But I found out that many adult autistics actually found it disrespectful to be called an adult with autism, because they were autistic … not every adult but most of them very specifically made their views clear (either in their bios, by proudly saying they were an autistic adult, or in posts about the subject).

You’ll find the same point of view in a lot of Deaf and Blind communities – they are blind, they are deaf … they aren’t a person with blindness or a person with deafness — I looked that up way before I ever looked up anything about autism, and I thought it made a lot of sense.

Not all disabilities are treated the same here though – there are lots of other groups of folks with one diagnosis or another who prefer people-first language.

This means there is a difference of opinion – not all people with disabilities see their disability the same way. Not all autistics prefer to be called autistic, though many do; most adults I have spoken with in the Deaf and Blind communities prefer not to use people-first language because they *are* a deaf or blind person and … they have many reasons, actually – and I urge to read about it further if you ‘re interested. Google is your friend.

Where does that leave us?

Think about it. If you refer to all people with disabilities or diagnoses the same way, even if they or their peers have said they prefer something else – how is that respecting the person?

If, by stumbling over language, you draw more attention to a person’s disability than a clear and concise reference would have allowed, how is that respecting the person and drawing less attention to their diagnosis?

It isn’t respecting the person or de-emphasizing their diagnosis.

Where We Weigh In

Crazy fact here, guys … my guys will ALL be adults one day. It boggles the mind, I know! If the majority of autistics writing about this prefer to be called autistic (because, they’re, you know, autistic), and they are offended when referred to as an adult with autism … I think that is an IMPORTANT distinction since, I hope, my own guys will eventually be able to be just as vocal about their own desires on the subject. (If you are autistic I would LOVE for you to weigh in with a comment – and if you have published a post that isn’t linked please do link it in your comment)

I stumble a bit over blindness – because Bobby and Logan are both legally blind but still have vision. Blindness can’t be exchanged for visual impairment – though they are often used interchangeably. The point — my guys are legally blind, but they have functional vision that blows us away (you really have to be looking to realize my guys have vision issues), so I usually say they are visually impaired, which I think is more correct.

I stumble again regarding epilepsy, because most adults with epilepsy do not self-identify as epileptic when they write about being epileptic, they say that they have epilepsy. Which, given that epilepsy is truly a medical condition, I think makes sense.

The point – when it comes to respecting the individual you take the time to find out. On my site, on my Facebook Page, when I post on my own social media profiles – I will use the language I think is most respectful, which is NOT always person-first language. Maybe that will change when my own kids are able to verbalize what langauge they prefer, but for now I take my cues from adults on the spectrum or who deal with some of the same diagnoses that my kids do.

Some parents feel differently about the words they use – and that’s okay, they have that right.

On their sites, their profiles, their status updates … they can use whatever language they think is the most respectful.

You know what isn’t respectful? Telling another parent how to talk about their own kids, or telling them what language they should use on their page, blog, or status updates. I’ve written about language awareness before, and about how respect should be the underlying desire when talking about anyone else or their kids.

So, this is why I say my kids are autistic and visually impaired and have epilepsy – I’m not trying to step on anyone else’s feet here but after researching it, thinking about it, and considering what my kids would prefer, I made a conscious decision to NOT always use people-first language.

In the end, it comes down to respect. You can say what you want when referring to my kids – as long as you do so with respect. I don’t require anyone to speak, think or write the same way I do. I will respond to others when they attack me, but you won’t see me attack anyone for the language they use.

I practice and ask for respect, nothing more and nothing less.

If you are interested in further reading (and please feel free to share your own in the comments):