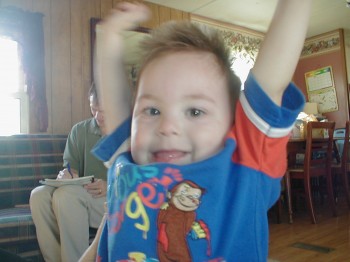 To say there is a bit of disappointment would be an understatement.

Last week I was in mommy-mode – that’s what I call my mode of handling life when the kids have to come before work and other commitments. I fell behind in some of my Autism Awareness in Action Campaign goals, missed a few other deadlines too. But that’s not a big deal. Because I am first and foremost a mommy – and I needed to concentrate on my little man last week.

Early last week we saw Logan’s geneticist and received confirmation that what we have been worrying about is, in fact, something to worry about (it’s good to have validation!).

Logan is beginning to make some progress verbally, but he’s been losing range of motion on his weaker side (weaker already due to his mild CP) and also losing some of his field of vision. New results had just come in at his case conference the week before, and the picture they painted wasn’t sweet.

In light of these current evaluations, I went to the appointment knowing we would be having one of THOSE talks — not the rosy and enthusiastic celebration of skills learned, but a serious discussion of the kinds of things I know way too much about.

The geneticist spoke about a rare disorder Logan had actually been found to already be a carrier for … something called Nephropathic cystinosis. What I didn’t know was that the test which had identified Logan as a carrier wasn’t complete for this genetic disorder, but only a partial genetic test meant to catch some of the more common genetic anomalies (and look for the ones we knew he had).

In light of Logan’s most recent evaluation results, and after examining him, the Dr. felt we should go for further genetic testing, and also have the eye specialist look at Logan to see if there are signs in the back of his eyes. He felt the odds were significant that we would be dealing with this one.

And Nephropathic Cystinosis? It’s more than a mouthful – it can be deadly. So we’re back in the waiting game.

The waiting game, however, is made worse because all the boys were recently dropped from Medicaid. So all those genetic tests and followup appointments we need to schedule? Can only happen out of pocket right now, to the tune of several thousands of dollars. Because Medicaid in Indiana is helpful and great … when you have it and it covers what its supposed to. The rest of the time it is an endless parade of re-evaluations and new forms to fill out.

I’m pretty sure we can work something out — but it was another brick on the wall of overwhelming obstacles last week. Mommy wasn’t really dealing well with anything other than being mommy last week as a result.

But it’s a new day and we’re whittling away at the situation one step at a time now. What I would love is your help in connecting with families who are dealing with this diagnosis themselves. So far I haven’t been able to connect with someone who has a loved one diagnosed with Nephropathic Cystinosis (say it ten times fast, I dare you).

Can you spread the word about this and see what turns up? My own research didn’t turn up an active community to interact with to learn more – but I bet some of you can find things I didn’t.

We’re dealing, and moving on into acting in the best interests of our amazing little guy, but his combination of seizures and this diagnosis is a bitter pill to swallow, you know?