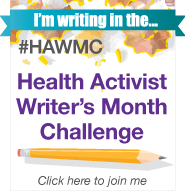 The Health Activist Writer’s Month Challenge (#HAWMC) is a chance to keep our focus at the Cafe beyond all things Autism Awareness, and since it is Autism Awareness Month I want to make sure to write about other health advocacy issues.

I know we don’t really need another challenge, or another awareness event, but the truth is, many of us go through our blogging adventure without a clear thought about how we want to reach our audience, how we want to create and inspire change in the world.

So I am going to try to write the 30 posts in 30 days for the Health Activist Writer’s Month challenge and invite you to join me if you want to be a little nutty along with me as well.

So, today is DAY 1 (a little late, but hey!). And we were supposed to be inspired to write with a prompt, or change the prompt up if we wanted to make the prompt a more personal fit.

From their Prompt sheet:

Pretend you’re making a time capsule of you & your health focus that won’t be opened until 2112. What’s in it? What would people think of it when they found it?

So, instead of thinking about a regular time capsule, I want to think about a letter to our descendants, describing our family a bit. First, I think I would attach the introduction to our children I included in my first post for the 30 Days of Autism, Autism Awareness Challenge.

Bobby is more than 1 of the Numbers, the Faces, of Autism

In Bobby, we have the child who has struggled to understand his world with additional sensory issues. Legally blind, Bobby’s diagnosis of autism was delayed because ‘blindisms’ can mimic autistic tendencies. Bobby, you see, was born almost completely blind, his eyes appearing almost white at birth because of the Axenfeld-Rieger Syndrome he would later be diagnosed with (a rare disorder).

… He regressed, he learned, he grew, and he fought. And for all he has had to fight, he’s a child with a ready smile and a sense of humor and teasing attitude that will make you adore him. His is one of the many faces of a child with autism.

Andy can’t be Defined as a Number Either

In Andy, we have the preemie who defied the odds and won, but not without a cost. Andy was born at 33 weeks, the result of an emergency c-section and a life-and-death race to the OR. He wasn’t breathing when he was born. Weighing in at just 3’14”, Andy was our tiny fighter.

… his bright face and enthusiasm for any challenge will endear him to you. You’ll fall in love with his very precise manners and some of the funny ways he puts his words together. He’s growing as tall as his dad and his feet are already the same size … and his heart matches it all. He’s a fighter, and a dreamer, he’s an artist, a writer, and has a heart of gold. And his is one of the faces of autism.

Logan can’t be Defined or Contained

Logan couldn’t wait to come into this world, but his pregnancy was one soap opera after another’s worth of drama. Also born at 33 weeks, Logan had stopped growing in utero at 28 weeks and came into the world as a 2’14” scrapper.

… In Logan we have most of our life and death moments as a family, and most of them began with his first major seizure at about 10 months old, when he seized for 45 minutes and didn’t wake up for two days. Since then, we’ve dealt with AFOs and SMOs and cerebral palsy, as well as the same rare disorder his brothers share … and through it all he has always been the most amazing little guy.

He has a sweet smile and a giggle that will literally melt your heart, and he has a temper that you DON’T want to be on the wrong side of. He’s a charmer and a rascal all in one. And he has been through things that many adults wouldn’t wish to deal with, and he still rises above it.

Nonverbal because of severe apraxia, autistic by definition, Logan can’t be contained by any one diagnosis. He is neither trapped in his own world or ever fully in ours. And his is one of the faces of autism.

Our children are a huge part of our lives here in Moody-land, and as a descendant you might wonder how the heck we did it. The truth is, sometimes he don’t. Sometimes we deal badly – we rail and fight and cry and steam and blame and cope in ways that show just how very human we are. But usually, we try to hold on to the promise that each of our children, and our family itself, is a blessing.

Our family is a puzzle, one in which the pieces are still being found in the ragged cracks and fissures of time. Our children, some day maybe their children, are all a part of that puzzle of life.

Solving that puzzle is all in finding the right pieces of the puzzle to put together. The pieces, as you start putting them together and patting down the jagged corners … they fit.

–One letter in a life well-lived. A few words to sum up a life filled with challenges and blessings. But through it all, we’re family. Our health has always been, and will continue to be, just one small part of the puzzle.