You are here: Home / Epilepsy / Link between Epilepsy and Autism 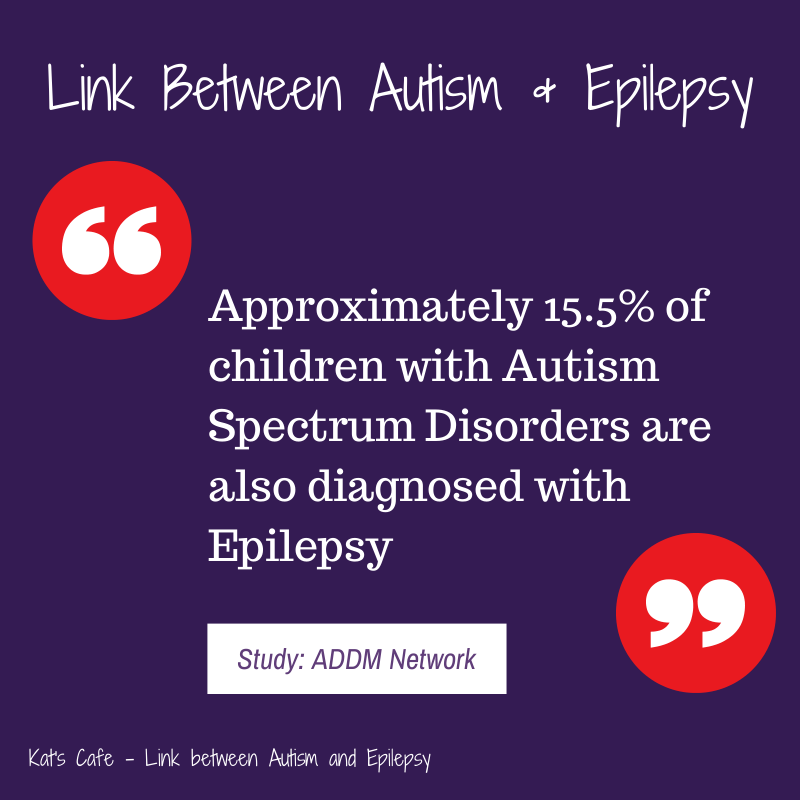 Note from Kat – Jessica is one of my go-to friends for Epilepsy support – she was one of the first people I reached out to online when I was new to dealing with the diagnosis and the overwhelming information out there. Sometimes, facts say it all … welcome her to the Cafe and help spread the word about Epilepsy Awareness would you?

I might be a bit of a data geek. My first instinct when writing this post was to share some hard facts on epilepsy and autism. Since November is Epilepsy Awareness Month, and epilepsy affects many people with autism spectrum disorders, I wanted to be sure I had my facts straight. Here’s what I found:

Link between Autism and Epilepsy: Data from 2002

A study using data from the Autism and Developmental Disabilities Monitoring (ADDM) Network, collected retrospectively from the year 2002, representing children with autism spectrum disorder showed approximately 15.5% of children with Autism Spectrum Disorders are also diagnosed with Epilepsy. This study published in the Journal of Developmental and Behavioral Pediatrics in 2010 was titled, “Autism Spectrum Disorder and Co-occurring Developmental, Psychiatric, and Medical Conditions Among Children in Multiple Populations of the United States.”

The Autism Speaks website notes as many as 1/3 people with Autism Spectrum Disorders are also diagnosed with Epilepsy. However, there is no reference notation to back this data up.

I hope you found this quick look at epilepsy and autism helpful. Sometimes it is good to know where to go for correct information. Visit this link for more information on the Autism and Developmental Disabilities Monitoring (ADDM) Network.

Get Involved in Epilepsy Awareness

Here are a few ways you can help increase Epilepsy Awareness this month:

I hope you take a moment this month to spread the word and raise epilepsy awareness throughout Epilepsy Awareness Month. If you need more ideas check out our facebook page. Readers are submitting comments on what they are doing to raise awareness during epilepsy awareness month. Submit your ideas, we’d love to hear them!