You are here: Home / Reviews / Rod Stewart’s ‘Time’ a Thrilling Listen for Mom 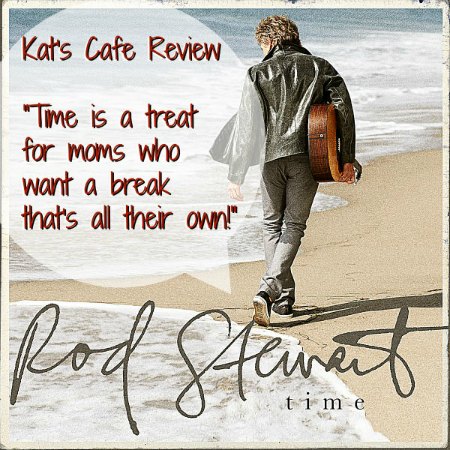 I was thrilled to have a chance to review Rod Stewart’s Time since I was a fan of his even as a teenager. His smooth voice was always thrilling to me, and the lyrics always seemed to touch my heart.

I’d have to say that the softer rock sound and heartfelt storytelling in Time was indicative of his harder rock roots, but with a different kind of sound. I loved it!

The best part of listening to this album, though? It was all for me! Jim and boys weren’t nearly as interested in Stewart’s latest release (their loss!) so listening to this music was a sweet pleasure that was all my own! That’s rare in this house! Time is a treat for moms who want a break that’s all their own!

It was a bittersweet listening experience, though, since most of the lyrics encompass emotions from the harsher side of his life. A few of the songs are about breaking up and divorce, but the underlying message is one of loving yourself and of love, the LOVE that’s impossible and amazing and awesome … and he captures the emotion of new love and mature love so well!

Love was woven throughout all the songs, but my favorite one wasn’t about the love from that special relationship, but the love of a parent. Pure Love was beautiful, with emotive lyrics sung in Stewart’s trademark smoky voice.

Pure Love speaks to the love between a parent and their child, a forever kind of love that most parents feel from the day their child(ren) is(are) born. Interestingly, it sounds almost like a love letter on its own as well, with lyrics like “There may be oceans in between us…” and “Take your time to embrace romance…”

This melody ends with “You’ll always be a part of me” – which is just how a parent always feels, in a visceral way, about their children. Personally, I think this song is the best of the album, specifically because it pulls the listener into the emotions of the song so beautifully. But that would do a disservice to the rest of the album, because Stewart really hit a home run with so many of the songs.

I enjoyed several other songs on the CD, but found them all easy to listen to. Rod Stewart has definitely not lost his edge at all. If nothing else, the life he’s led over the last 20 years has given him a more emotive edge, though I would have thought that impossible!

You can watch the following video for more of an introduction to more of the songs on his new album, but I have to say I think Stewart’s sweet lyrics and emotional singing has just nailed this one as a must-own for any Rod Stewart fan!

Stewart’s written about how inspiration struck when he was, curiously enough, already at work on his best-selling autobiography Rod. His muse, which was largely absent during his 20-some year absence from writing music came back in a rush …

“Suddenly ideas for lyrics were piling up in my head,” he says. “Next thing I knew, I had a song called ‘It’s Over’ about divorce and separation. And now I was getting up in the middle of the night and scrambling for a pen to write things down, which has never happened to me. I finished seven or eight songs very quickly and I still wasn’t done, and it became apparent that I would eventually have a whole album of material to record.”
~ Rod Stewart, on inspiration striking, as written at Emimusic Publicity

In case you lived under a rock. Rod Stewart is a two-time inductee into the Rock and Roll hall of Fame and a Grammy Living Legend. He’s released 27 albums (!) and sold an estimated 150 albums worldwide. He’s literally a rock legend! And I remember his music speaking to me as a teenager, loving the sound and the rhythm – so I’m not surprised that I love this one too!

For those interested in learning more about the man or the music, you should check out his website. Also, if you’re thinking about purchasing and an iTunes user, consider purchasing there because the iTunes Deluxe Edition of the “Time” CD includes 3 bonus tracks! (why yes I’m a little bit of a nerd about such things!)

To purchase the album: ON iTUNES  |  ON AMAZON

Obviously I love the album and I’m thrilled to have received an advance copy to enjoy and review, but I am also honestly in love with Stewart’s talent – the man really is a legend and this album puts all his skills on display once again for all to enjoy.

If you enjoy amazingly heartfelt music, emotive lyrics, and a sexy voice, you won’t go wrong buying this one yourself! Also, if you need something to enjoy during your next “me time” I encourage you to consider listening to this and losing yourself in the words and rhythm!

You won’t regret checking out Rod Stewart’s Time – it’s a thrill for the senses!

This post was made possible by the fine folks over at the One2One Network, where I’m a proud member.

I received the awesome Rod Stewart CD, Time, for free and in return promised to give my honest opinion of the album. While the item was provided for free for my consideration, all opinions are 100% my own!