You are here: Home / Advocacy / Not a Stranger Anymore 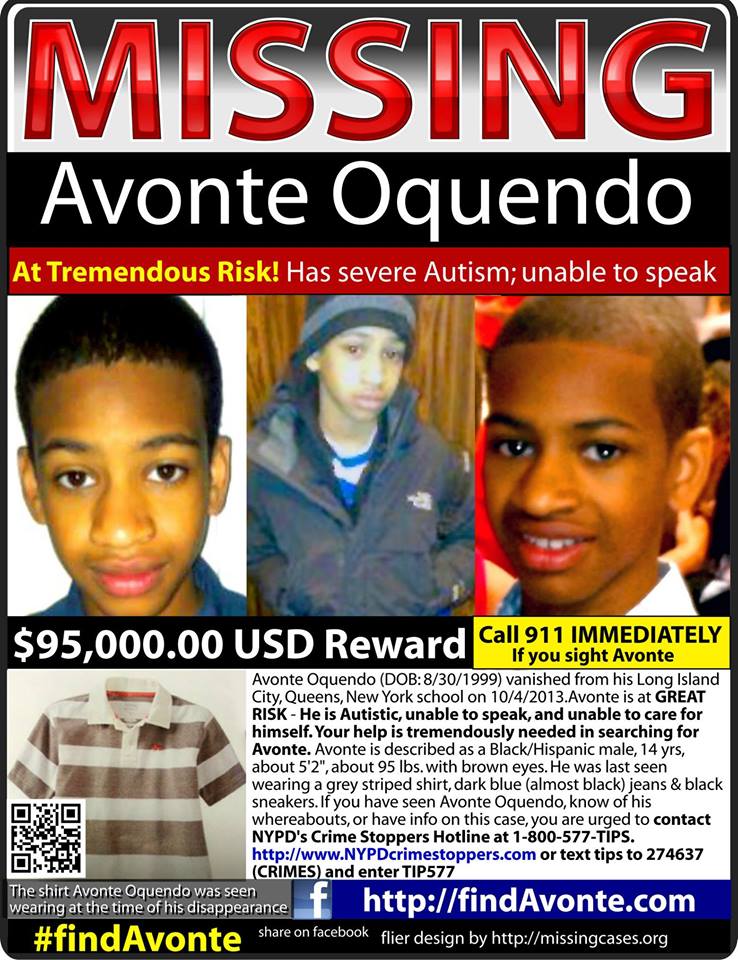 On October 4, 2013, Avonte Oquendo, a 14 year old, non-verbal student with autism, went missing from his school in Long Island City, New York. Surveillance cameras provided images of Avonte running through an empty hallway and then on a sidewalk outside of the school. He has not been seen since.

Countless news agencies continually covered the tragic story of the boy who seemed to have vanished into thin air. Family members set up a tent across the street from the school. The tent would become “home base”, “Avonte’s ground zero”.

But most importantly, the tent was a place the family hoped Avonte would return to. There would be at least one family member in the tent every hour of every day. When Avonte were to return, he would recognize a loved one and run to their open arms. He would not run away as he did that Friday afternoon.

Acting on the News, Beyond Watching

I, like thousands of others, watched the news on television every night hoping to hear of Avonte’s safe return. That news was not reported. What I did see on television, over and over again, was his mother, father, brothers and other family members standing in front of that tent. They were asking for help, expressing hope that Avonte would be returned to them soon and unharmed.

Ten days into their coverage of the story, a newswoman from a local television network made a statement that I just could not ignore. On the 11:00 p.m. news she stated how cold it was getting during the evening hours and how the family could benefit from the use of an RV, a motor home.

My wife and I had just purchased a new motor home last year. We live in Stanhope, New Jersey, which is about a ninety minute drive to “Avonte’s ground zero”. Children with autism hold a special place in our hearts; we both work with children that have special needs. And, as fate would have it, I was off from work for the next seven days. Surely Avonte would be found within that time period! The decision was made, without hesitation, to drive into Long Island City the next day to offer the family the use of our motor home.

A Place of Refuge in the Storm

When I arrived at the intersection of 51st Ave. and Center Blvd., the location of Avonte’s school, I explained the purpose of my presence to a New York City police officer. After some shuffling of various media vehicles was complete, the motor home was parked within a few feet of the tent that was awaiting Avonte’s return.

I immediately recognized one of his brothers that I had seen on the news. Danny Oquendo was standing in front of the tent. Upon introducing myself, I offered the family use of the motor home. Danny smiled. He extended his hand, shook mine and asked me to “please wait right here”. Avonte’s parents, Vanessa Fontaine and Daniel Oquendo, walked over to thank me. I then gave them “a tour” of the motor home. The use of the facilities contained within it were available to any family member or friend.

Throughout the next six days the motor home would become not just a place to sleep, nap, relax, watch television, use a clean toilet, or heat up their food and eat at a table.
It would become a sanctuary for the family of Avonte; a refuge. It was a place to escape the constant questions that were being asked of them by so many, over and over again. The motor home was a place where the family could come and its’ owner, no longer a stranger, would make them laugh or provide them with a hug. If only briefly, they received much needed respite from the reality of why we were all at this location to begin with. That was very important to them. They told me so.

I was present for numerous press interviews. During one, a reporter asked Daniel a question that had been asked of him a half of dozen times already that day. I was standing behind the reporter and cameraman. I could see the look of frustration in Daniel’s face, so, as he took a deep breath and prepared to answer, I began doing jumping jacks. Daniel looked at me. He began laughing uncontrollably. Before the reporter could turn around to see what was so funny, I stopped and just walked away. That night in the motor home, Daniel told that story more than once, stating that’s why he loves and is going to miss me.

In just a few short days the family and I became true friends. We were comfortable saying pretty much anything around or to each other. Avonte’s family is African-American. I am not. That fact was never an issue to any of us, nor should it have been. There were a few times that it added levity to a situation, however. On Friday night, October 18th, I was in the motor home with Avonte’s immediate family. The following day the Rev. Al Sharpton was holding a rally in support of Avonte at his National Action Network’s House of Justice in Harlem. The family were his guests and I was going with them.

The following day at one point during the rally, Rev. Sharpton called me by name and asked me to join him on the stage. He acknowledged my contribution to the family. He thanked me. We embraced in a hug before I returned to my seat. It was a precious moment in my life that I will never forget.

That Saturday night in the motor home the family mentioned how I “kind of stuck out in the crowd” at the rally. Some jokes were made on the subject and we all enjoyed another break from reality.

During the daytime on Sunday, I participated in numerous search efforts for Avonte, something I had done every day while there. Late Sunday night, it was time to pack up the motor home; previous commitments awaited me Monday morning. As we hugged and said our good-byes, my new friends asked me to please stay in touch with them; they want me to meet Avonte when he comes home. With tears in my eyes, I assured them that I would and will continue to pray for Avonte’s safe return.

As I drove away I recalled a question that some had asked me; “How could you offer your motor home to total strangers?” My response, “They’re not strangers anymore.”