You are here: Home / Advocacy / Our Birth Story and the Story of Hope 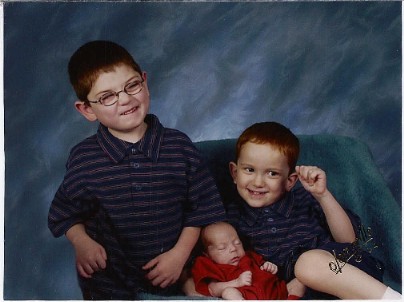 Our Birth Story is not for the Weak of Heart, but its full of Hope

Each of our boys was born in a state of emergency and desperation, leaving us full of hope and questioning what their futures might bring. I don’t talk about it much, but their births were only the best days in my life because my guys were born – in every other way those days were the worst.

And yet, in a world where over 1 million babies die on the very day they enter this world, I know we’re lucky in ways others might find hard to understand.

After all, most people don’t consider it lucky to find out every one of your children is born with a rare disorder, that one is completely blind, that another had a brain bleed … it most assuredly doesn’t seem like luck – but we were blessed. Because our children made it. They lived.

I am sure I’ve written before about Bobby’s entry into this world, but it never seems any less miraculous. By the end of Bobby’s pregnancy I was extremely swollen with high blood pressures and horribly sick. I had pre-eclampsia, a disorder that effects millions of women each year and causes some 10,500 newborn deaths in the U.S. alone and half a million deaths worldwide (from the Preeclampsia Foundation). I went to a prenatal appointment just before 36 weeks and ended up going home to pack, ordered back to the hospital.

Bobby was born at 36 weeks gestation, just past the point of being a preemie, and weighed in at 5 lb 2 oz. And after his birth, I didn’t care about any of the fear, the terror, I only had eyes for my little guy. Until a nurse in the delivery room whispered to the doctor, and suddenly I was in shock again.

“There’s something wrong with his eyes…” The nurse’s words were followed by a request for the specialist on call to come look at his eyes. His eyes were almost white, clouded over.

That moment, the one where a nurse spoke words that broke my heart, you could have heard a pin drop – or at least it seemed that way to me. Our lives changed forever that day, not because we became parents, but because we became special needs parents and were thrust into a world more terrifying than typical parenthood.

But his birth, has scary as it was – and it was scary as hell – was a success. We had a beautiful little boy with a full head of hair and sweet disposition. And I never could have imagined loving a little boy more.

Preeclampsia hit again when I was pregnant with Andy, earlier this time. At 32 weeks pregnant I was ordered straight to the hospital after worsening blood pressures and swelling. Once at the hospital we endured test after test to see how our little man was doing. What we found out was terrifying.

I was at the hospital for almost a week when the doctor gave us a grim announcement at the last ultrasound, Andy’s measurements were those of a child much younger – he had stopped growing and would go into fetal distress if we didn’t head into an emergency c-section.

I wish I could say that was the end of that story, but because of my preeclampsia, my placenta abrupted (it tore away from the wall of my uterus), causing massive internal bleeding. Had we not been hospitalized Andy and I would have both died, and even though we were at the hospital and already prepping for an emergency c-section when there was suddenly way too much pain and blood (sorry for the visuals – imagine living it!) … it was still a life and death struggle.

Andy was born gray, not breathing, and was whisked away for resuscitation  When we were finally allowed to see him and were told he was breathing, that he was okay … let’s just say despite being drugged and weak and in pain, I remember that moment beyond just about anything else. Jim just remembers the blood (poor guy was traumatized for life after this birth!).

Andy was a whopping 3 lbs 14 oz when he was born, tiny even beside the other fighters in the NICU. His birth story was terrifying in life threatening ways, but Andy’s birth was another blessing and testament to the level of health care we had available.

When we went to the OB to confirm Logan’s pregnancy, we learned his heartbeat was slow and that I would likely lose him … and Logan proved that even then he was a fighter; a week later we went back and the OBGyn said he looked perfectly healthy.

His pregnancy was a hard one, and I was hit with the beginning signs of preeclampsia at just past 20 weeks along. By the time we hit 30 weeks I was on the highest dose of blood pressure medication I could be taking, I was swelling worse than during my other pregnancies, and I was fighting horrible headaches caused by all the stress to my body. I was on bed rest, and my body was still pushed to the breaking point.

It was at an ultrasound just days later that we verified what my OB was worried about – Logan was in distress and had already stopped growing. The umbilical cord was wrapped around his neck three times and was endangering his health … he would have to come out.

Unlike the drama of Andy’s delivery – everything went fairly smoothly for Logan’s delivery – except that I was very out of it and barely remember anything from the whole time period because of the medicine they were giving me for my preeclampsia.

He was a scrapper, born weighing in at 2 lbs 14 oz and breathing without the need for a ventilater. Weeks later we learned he had a brain bleed … we were destined, it seemed, to have awesome little guys who needed us in amazing and unique ways.

The common thread in our three birth stories is that no matter the circumstances, we had hope during and after the pregnancy, because we had excellent care and were blessed to be able to bring our boys home, some a little later than others.

As part of the special needs community, I read stories constantly of families who have had similar experiences, and I can’t help but think that hope holds us up, it empowers us and strengthens us during these early days. Part of the pain in putting this post together for the Global Team of 200 is knowing that for so many women, hope isn’t enough to bring their babies home from the hospital.

Millions of babies have been born due to the efforts of organizations like Save the Children, who push education and advocacy to literally save the children. This years State of the World’s Mothers Report by Save the Children bring focus back to the largest number of babies that can be helped in real ways if people, people like you and I, work together to make a difference. In the words of Melinda Gates …

In commemoration of Mother’s Day, Save the Children is publishing its 14th annual State of the World’s Mothers report. Every year, nearly 3 million babies die within the first month of life, most from preventable causes. More than a third of these babies die on their first day of life – making the birth day the riskiest day for newborns and mothers almost everywhere. This report shows which countries are doing the best – and which are doing the worst – at preventing these deaths. It also examines the need to strengthen health systems, train and equip more health workers and make proven, underused solutions available to every mother and newborn who needs them. Such efforts could help prevent as many as 3 out of 4 newborn deaths.

What I’ve realized, in sharing our birth stories and reading more about Save the Children’s initiative, is that our stories are humbling, when compared to those who don’t have the chance to share their own story of life, of the joy in their newborn baby.

Where it Leads – Every Birth Story Makes an Impact

Every birth story is one of hope and new beginnings, except for those who don’t get the chance to share a story of birth. I’m asked often how I handled having three boys with special needs, and I have often said that at least I have had the chance to love my boys, regardless of their difficulties.

So many mothers will never get that chance. More heartbreaking is that as many of 3 out of every 4 newborn deaths could be prevented if we would share the statistics and advocate for changes to help these most fragile of our world citizens.

This was our birth story and an introduction to Save the Children’s initiative and report, but I will be sharing several other resources here at the Cafe and would ask you to look through them and share them, really think about how you can effect the lives of of those yet to be born.

Elsewhere at the Cafe on the State of the World’s Mothers and Save the Children: (Coming Soon)

The Global Team of 200 is a highly specialized group of members of Mom Bloggers for Social Good that concentrates on issues involving women and girls, children, world hunger and maternal health.

Our Motto: Individually we are all powerful. Together we can change the world. We believe in the power of collective action to help others and believe in ourselves to make this world a better place for our children and the world’s children.