You are here: Home / Advocacy / Words Hurt – it Really is That Simple 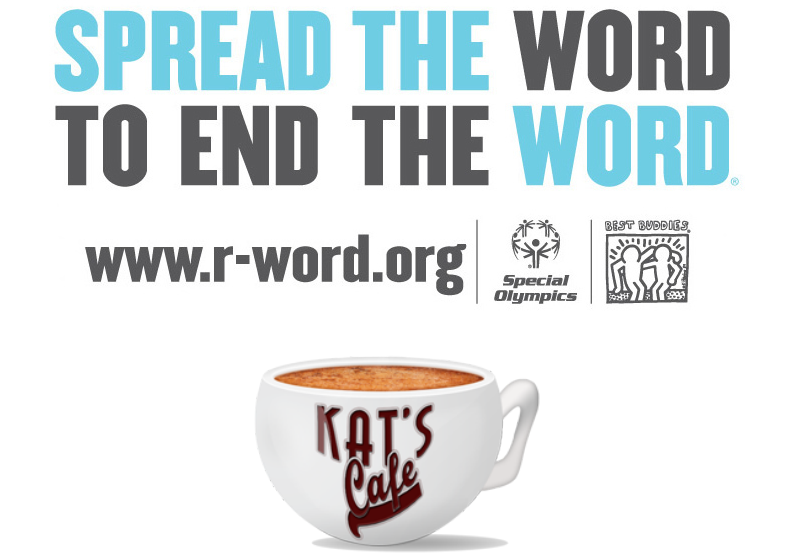 The r-word campaign is all about respect, and acknowledging that the more people that know about how derogatory the r-word is, the better. The r-word stands for ‘retard’ and the campaign is about pledging NOT to use that word.

The Cafe’s Facebook Page was jumping yesterday as I tried to share tons of posts related to the Spread the Word to End the Word campaign, and I was reminded often of the good in people as so many came together to celebrate awesomeness in all forms.

Only a few comments surfaced of people who didn’t really agree with the campaign, and that’s okay, not everyone needs to agree with me all the time. But …

Bobby’s Words – It Really is that Simple

My guys each jumped at the chance to take a #RespectSelfie with me to commemorate our r-word pledge. While I had to tickle him for the grin, Bobby was very specific about ‘not liking that word’ because ‘it’s a bad word’. And I couldn’t help but think that it really was that simple.

Bad words, in our house anyway, are words that make others feel bad, that make fun of others, or that are downright mean. We have several words that we equate to true naughty words, and the r-word is on that short list. Why? Because it’s a bad word. It makes my guys feel bad – about themselves, their brothers, their family, their friends.

My guys know that when we hurt someone with our words, it’s a bad thing. It doesn’t matter what those words are.

Why Use the Word ‘Retard’?

I saw many different arguments against the campaign on the Cafe wall and as I toured other pages and while I don’t seek to address them all I thought I would pull one of the biggest points out to discuss.

One of the most frequent points others make is that banning a word doesn’t make any sense, or that it’s against their free speech to say they can’t say a specific word … and here’s my response to that.

There are certain words that are so filled with negative connotation for some groups of people that they literally cause harm – for some African American’s the n-word is like this, as are many other racial slurs. It’s commonly accepted that most people won’t say those words in polite society. Not because they offend them personally but because they recognize that those words are demeaning towards entire populations of our friends and neighbors.

How is that different from the r-word? An entire population of people are being offended by that word – they are HURT by that word, at a visceral level. These are our sons and daughters, our siblings, our friends and neighbors … it is this entire community that is stepping forward to ask you, please, not to use that word.

Is there a law against it? No. Government isn’t making a law asking you not to act like a douche, this community of folks full of awesomeness and those who love them are. They’re asking you – please don’t act like an … well, like a not nice person. As Bobby would say, it’s a bad word. It’s mean to say it.

No one is threatening your “rights” – unless you are threatened by the thought of acting decently?

It’s a Bad Word – and Bad Words can Hurt

Sure, we can teach our kids to ignore people who say that word, and we will. But is it asking too much to ask you to think before you say a word that demeans an entire community of awesome adults and kids who just happen to have an intellectual disability?

I really don’t think it is. Think before you speak. Pick words that make your point differently, don’t stoop to being *that person* who can always be counted on to be rude. There’s an entire population of amazing people who’d sure appreciate it.

Keep Reading on Other Sites: